Meet The Club Racing Board: Part 2 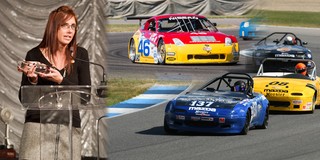 This article first appeared in the July, 2020 edition of SportsCar Magazine. Everyone can read the current and past editions of SportCar digitally here. To become an SCCA member and get SportsCar mailed to your home address monthly in addition to the digital editions, click here.

Last month in this column I introduced you to three members of the Club Racing Board (CRB), specifically Tony Ave, John LaRue, and David Arken. If you missed it, I highly recommend you pick up last month’s issue and give it a read – after all, these are the folks who are helping lead the SCCA Road Racing program, so it’s good to know their background. Now that you’re up to speed, let’s jump into this month’s CRB introductions.

CRB member Paula Hawthorne is a liaison to the GCR and B-Spec committees. She has a great deal of Steward experience and has crewed for professional racing teams in IMSA, World Challenge, and Mazda Road to Indy.

A member of SCCA’s Steel Cities Region since 2008, Paula joined her Region’s Board a decade ago. She has also filled several different roles with Steel Cities, including Region Executive, Assistant RE, Membership Chairman, and Race Chair. She developed her Region’s “Steel Cities Ticker” e-mail notification system that keeps people informed of upcoming events, and she also found time to become a Divisional Steward and earn a National Grid license, Regional Flagging and Communications license, and Regional Registrars license. Then in 2015, Paula received the 2015 SCCA Worker of the Year Award for Race Administration and also SCCA’s Member Excellence Award.

Next on the CRB lineup is Sam Henry. A registered mechanical engineer, Sam is currently Regional Executive for SCCA’s Ozark Mountain Region and sits on his Region’s Board. He has held multiple positions in his Region, including Assistant RE, Secretary, Treasurer, and Solo Manager. Sam is an active Production category racer and autocrosser. He’s also a four-time RallyCross National Champion.

On the CRB, Sam is liaison to the Production and Spec Miata committees. His Miata expertise stems from years of competition and ownership of Springfield Dyno, a company that developed Miata exhaust and cooling systems, as well as designed custom CNC tire shaving equipment. Sam is a certified Goodyear Eagle Performance Specialist and his company also provides dyno testing, tuning, chassis setup, and complete wheel and tire services.

The last CRB member to introduce this month is Jim Goughary. After taking a Formula Vee through an SCCA Driver’s School in 1973, Jim went on to have a successful career in SCCA Regional and National racing. He has competed in Formula Super Vee, Formula Ford, Super Touring Lite, and GT-2, as well as Showroom Stock A, B, and GT. Jim is the CRB’s liaison to the Grand Touring and Super Touring committees.

An active member of the Road Racing Drivers Club, Jim is also a four-time GT-2 SCCA Runoffs National Champion. He also has several podium finishes in IMSA racing, one of them coming in 1986 where he won the Firehawk Six Hour at Road America. You can toss in an IMSA fastest race lap at Lime Rock, too.

And, as a final note, once SCCA Road Racing has resumed (if it hasn’t already), it will be absolutely imperative that you support the SCCA as much as possible. If you can’t race, volunteer. Getting back up to speed will take a team effort, but if we unite and work together then this Club and our sport will emerge as strong as ever.